A tour of the best architecture in Vienna

On my recent trip to the Austrian capital my boyfriend took me on an architectural tour of Vienna. It was such a cool day and I recommend anyone interested in architecture and history to explore the city like we did. Vienna is such a diverse city, sure it’s an imperialistic city but its buildings evoke so many different architectural styles. The funny thing is that Luca had never been to Vienna before and it’s like he knew everything! He took me around, created a little itinerary and we walked and walked! Just a heads up, you’re going to need a pair of comfy shoes! 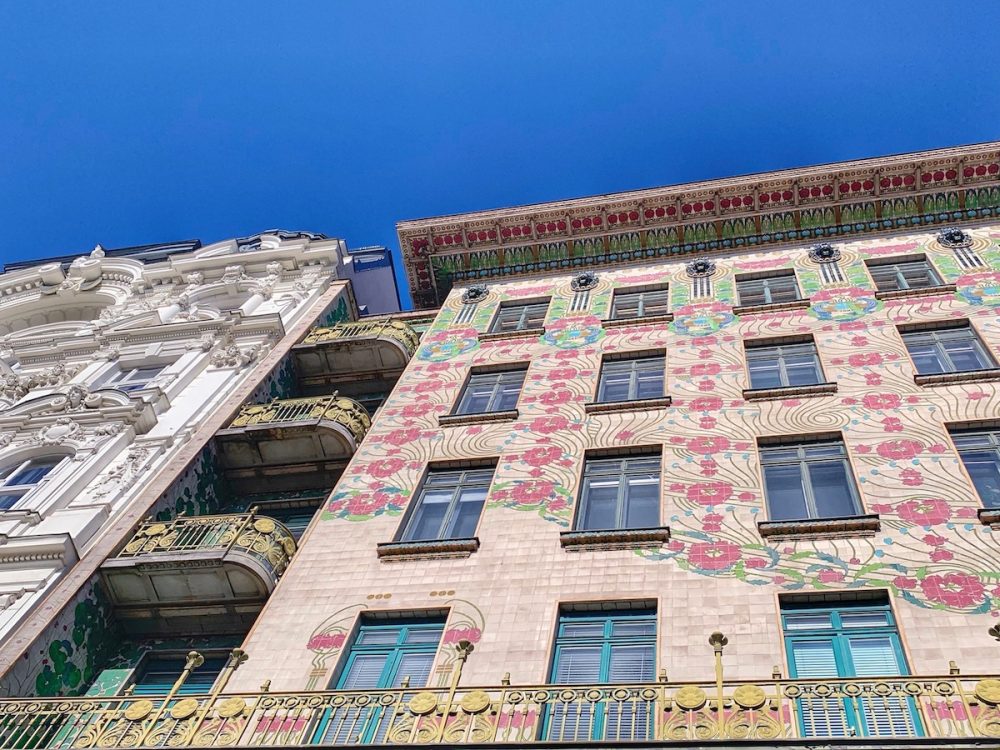 Floral shapes and shades of pink, blue and green cover the entire façade of this building. But it’s not till you get up close and see the light reflect off the wall that you see that the façade is entirely covered in ceramic tiles, also known as majolica.

This is Majolikahaus, Viennese architect Otto Wagner’s famous complex located in the Ringstrasse. Wagner designed the building during his Secessionist design phase, where he adopted an architectural style in between traditional styles and Art Nouveau. Wagner was surely one of the architects that bought modernity to Vienna, and his architecture is iconic in the Austrian capital.

Majolikahaus, constructed in between 1890-1899, shows Wagner’s simple yet elegant design that made him so popular. Get up close and admire all of the details, and don’t forget to look up to be delighted by the roof designs too! 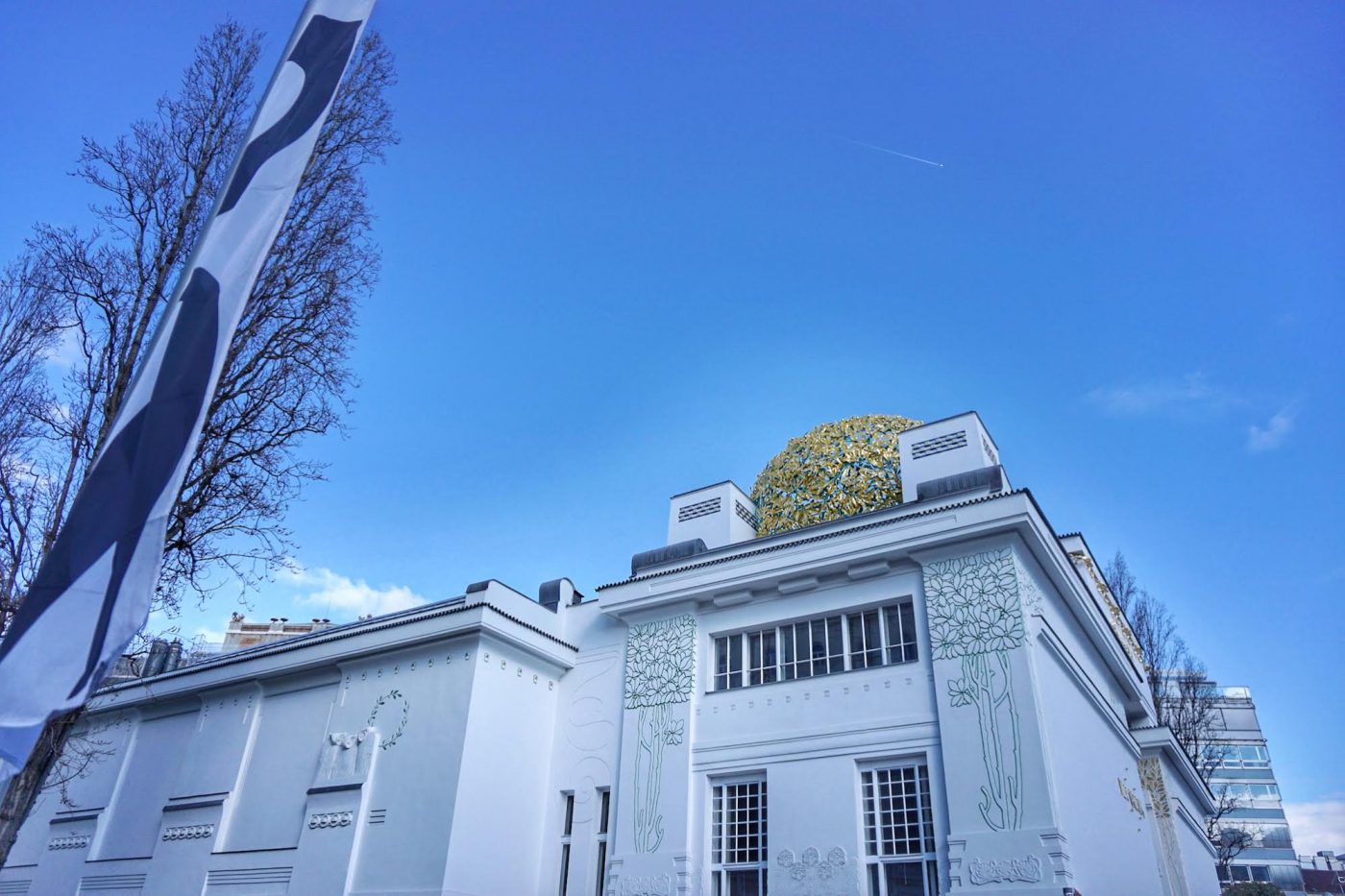 Right after Majolikahaus Luca took me to the famous Seccession building, which represents the architectural manifesto of the Viennese Secession. You see, I wasn’t very aware of this architectural movement, Luca explained to me that during the end of the 19th century, an architectural movement was developing in Austria and Germany whereby artists and architects detached themselves from the Künstlerhaus – the Association of Austrian Artists – and founded an independent association called Secession. This new group had their head quarters in what is today the Secession Building, and the main protagonists of this movement were Gustav Kimpt, Egon Sciele, Koloman Moster, Otto Wagner, Max Fabiani, Joseph Maria Olbrich, Carl Mool and Josef Hoffman.

It was Joseph Maria Olbrich that constructed the modern building – which was and still is today an exhibition hall. Also nicknamed the “golden cabbage” for its leafwork dome made of gilded leafs, this building is a must-visit on your architectural tour of Vienna! 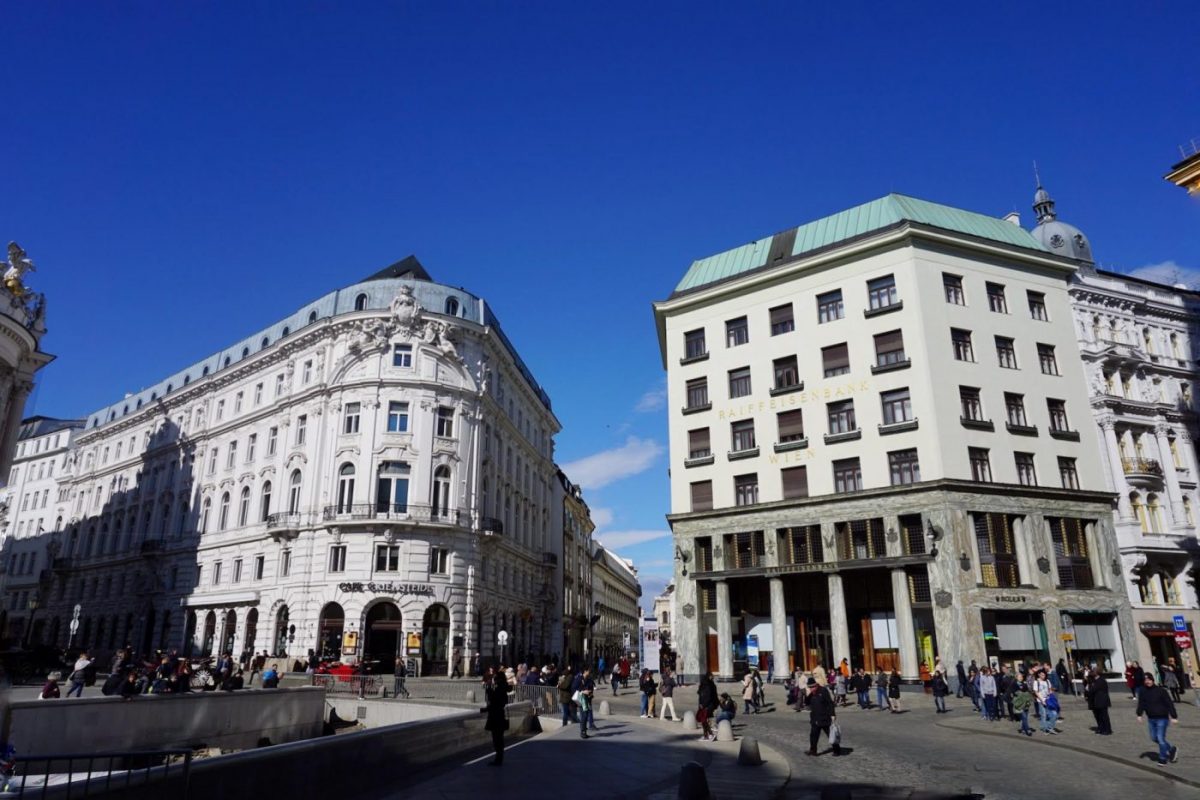 Right on Michaelrplatz in front of the Hofburg complex you’ll find the famous Looshaus. Designed by the famous Viennese architect Adolf Loos, this beautiful building is one of the main examples of Modernism in Vienna. It marks the abandonment of Historicism but also of the floral decorations of the Secessionist style. Looshaus recalls the school of Chicago and the first skyscrapers.

Apparently, Emperor Franz Joseph detested the building, and avoided the building for the rest of his life. He didn’t even use the exist to Micahelrplatz to avoid seeing the building. 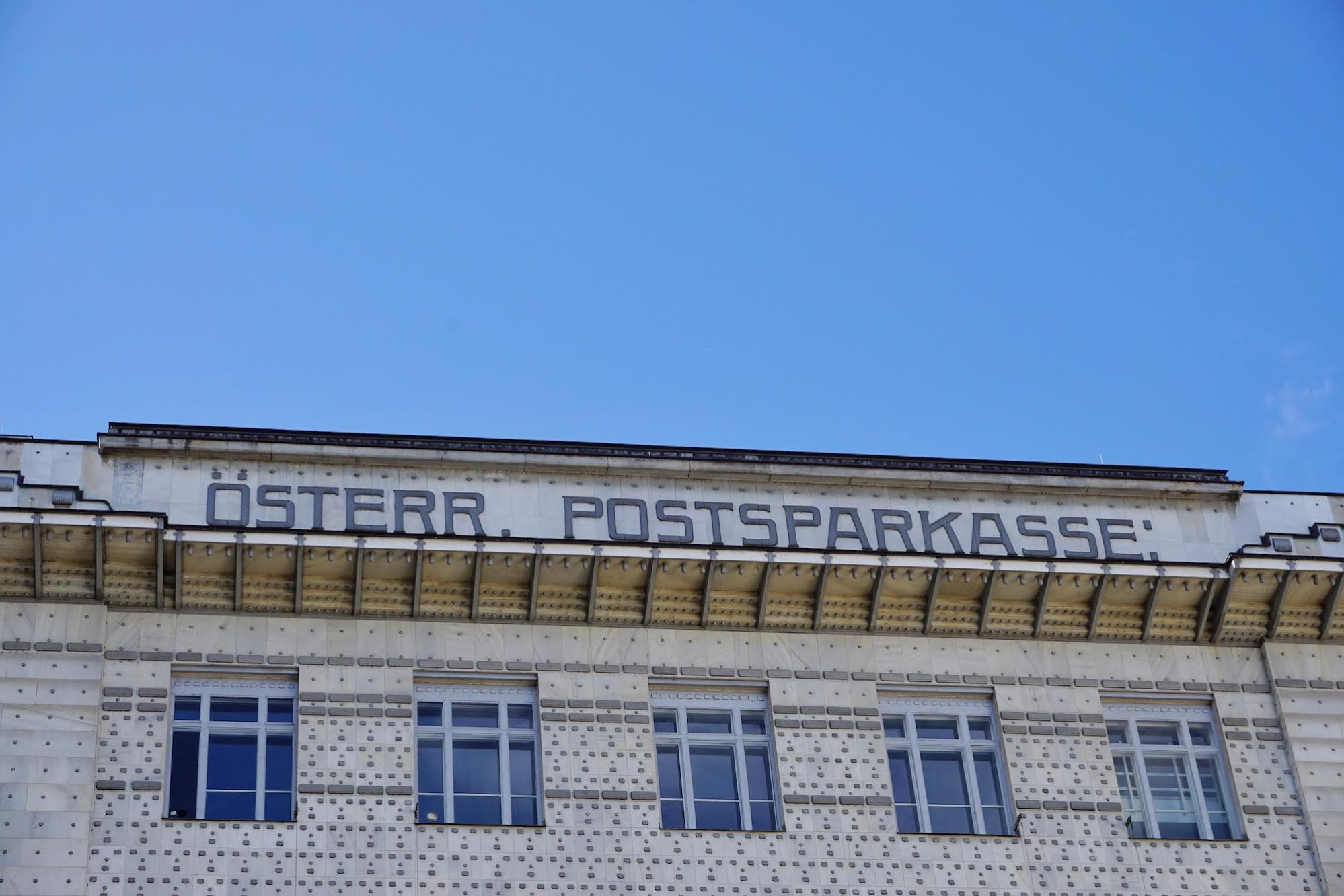 This one of the most interesting examples of functional architecture in Secession style, designed by architect Otto Wagner. Today it’s the site of the Austrial Postal Savings Bank. Back in 1906, when the Postsparkasse building was inaugurated, the very idea of ​​applying the artistic criteria to a “profane” building represented something completely new, as did the use of reinforced concrete as a building material!

The simple facade is decorated with marble and granite plates, the aluminum nails that seem to fix these plates on the facade are actually just a decorative element, but that’s where the building gets its nickname “box of nails”. And two aluminum angels by the Hungarian sculptor Othmar Schimkowitz sit at the very top of the building, 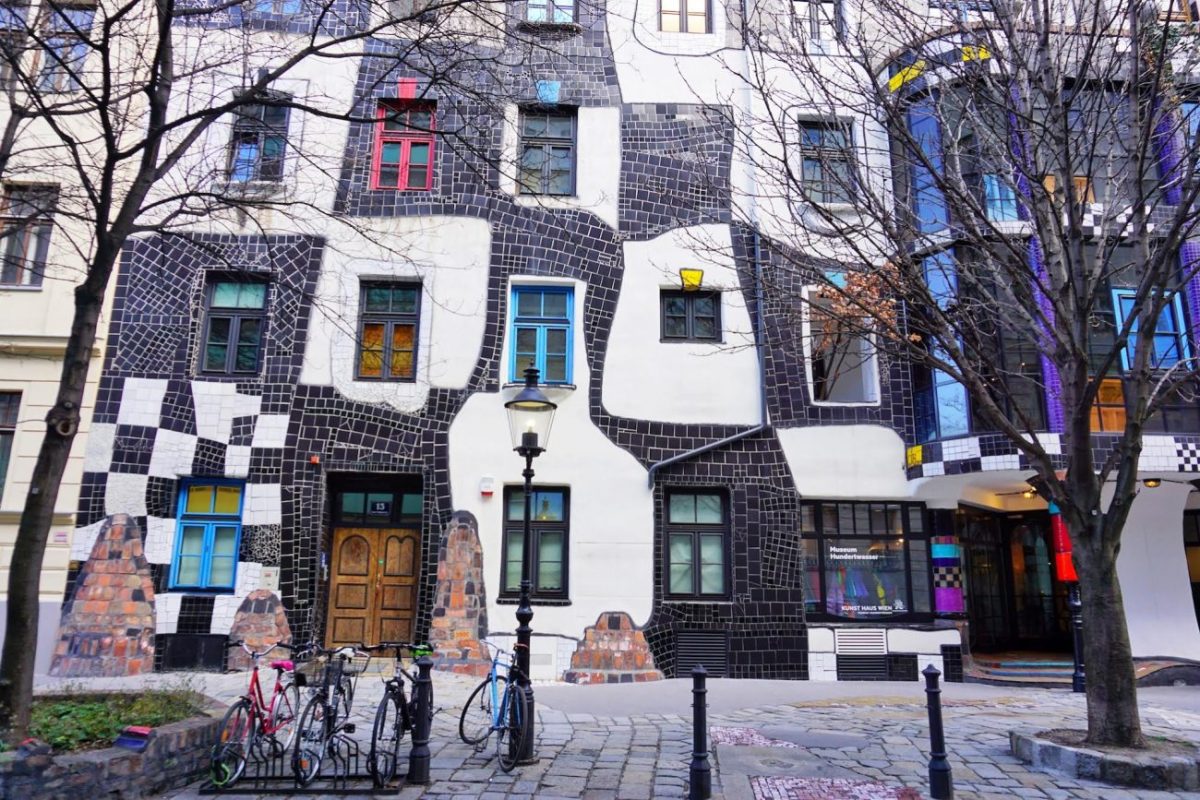 The former Thonet bentwood furniture factory was transformed by the artist and architecture Friedensreich Hundertwasser. Eclectic materials such as wood, ceramic tiles, metal and class cover the façade of Kunst Haus, not to mention its beautiful irregular shapes and forms in bright colors!

Today this building is a museum where you can learn about Friedensreich Hundertwasser in a permanent exhibition as well as visit temporary exhibitions. Definitely check out their courtyard with a small cafe, string lights and a unique atmosphere! 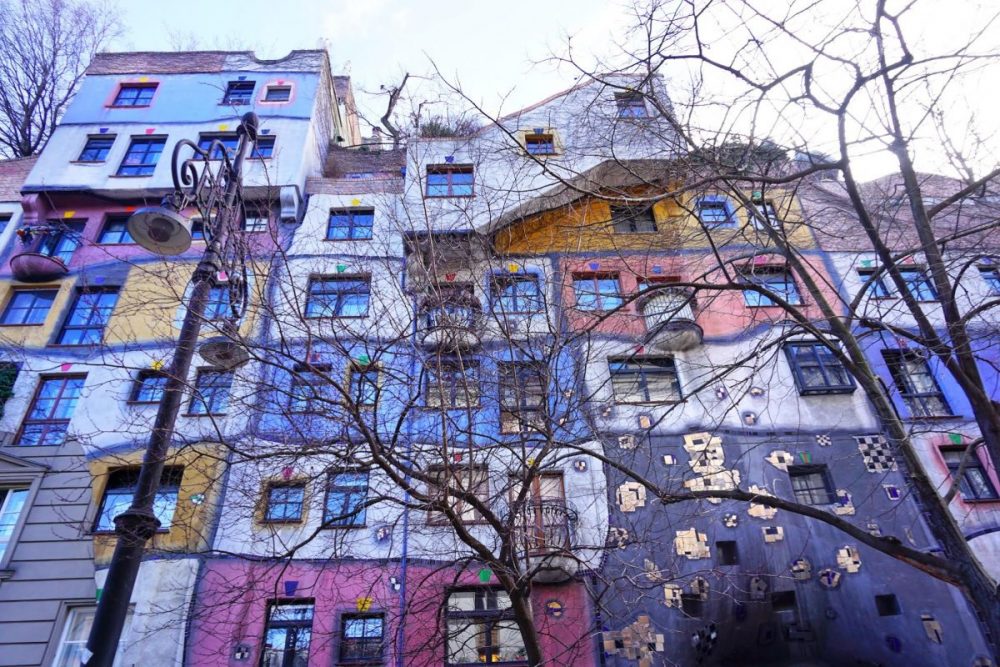 This was our last stop and it’s located East of the center in the Landstraße area. As we walked towards Hundertwasserhaus – a complex of houses built in 1986 – we were so impressed by the bright colors! It’s like the building is a giant irregular puzzle! Designed by the artist and architecture Friedensreich Hundertwasser, the complex is an important example of Modernist architecture in Vienna sitting in a green oasis surrounded by hundreds of trees!

Obviously the brightly decorated façade attracts lots of people, all camera-ready! You won’t be able to visit the inside as it’s a private building, but funny thing is, the inhabitants of the Hundertwasserhaus have the right to decorate the façade around their windows according to their personal taste!

48 hours in Vienna during Ball Season

How it feels attending a Viennese Ball