8 places to get the best views of Budapest

Walking down the Hungarian capital’s tree-lined avenues and admiring its beautiful Art Nouveau architecture is a great way to stroll  the city. But if there’s one thing you can’t miss out on in Budapest it’s the views. Budapest is one of those cities that is beautiful from above: its unique roof tiles, stunning architecture, boats navigating the Danube, and the many bridges are best admired from panoramic view points. And if you’re searching for the best views of Budapest, you’re in the right place! Here are my favorite locations to admire the breathtaking Hungarian capital.

While Varkert Bazaar is mostly known as one of the city’s most prestigious event venues, it also has something else to offer: a fantastic view of Budapest. Situated in Buda, between the Chain Bridge and the Elizabeth Bridge, you’ll find a picture-perfect terrace that just so happens to be the garden of the Castle of Buda. Climb up the stairs and take in the jaw-dropping views of the Parliament building, the Chain Bridge, Margaret Bridge and the Danube. And if you’re here at sunset, soak into the city’s pink-tinted sky and wait till the evening lights illuminate the city.

You’ve passed Gellert Hill many times, probably when you were walking toward Liberty bridge. It’s that beautiful monument hidden in the gardens that you’re always pointing at. And don’t just point at it, get yourself there as the view is totally worth the flight of stairs! Gellert Hill, named after Saint Gerard – a bishop who was thrown from the hill in the 11th century – offers one of the most beautiful panoramic views of Budapest. From here you can admire the Castle of Buda, Liberty Bridge, the parliament and so much more. And the view of Pest is certainly fantastic.

Margaret bridge is the second oldest public bridge in Budapest and is definitely one of the most stunning. Connecting Buda to Pest as well as linking Margaret Island on the banks of the Danube, Margaret Bridge is just a 10-minute walk from the Hungarian Parliament building and it’s totally worth the walk. The view from this bridge is one of my favorites. Since it’s a three-way bridge you can get different angles of the same view. Even when I’m in a car, my head can’t stop turning to admire the Parliament, the castle, the Fisherman’s Bastion and the Chain Bridge.  And if you want to get away from the city and stroll in a beautiful park, head to Margaret Island!

With its Baroque architecture and stunning terrace overlooking Pest and the Danube, the Castle of Buda is a great place to take in the city’s panoramic views. Plus, if the Hungarian Kings resided here, there must be something worth all the fuss! The Castle offers great views and a wonderful atmosphere, and if you walk down Castle Hill, you’ll get some stunning angles of the city!

The Fisherman’s Bastion is probably the most famous panoramic viewpoint of the city, and for good reason too. Situated in the Castle District – where you’ll feel like you’ve been catapulted in a fairy tale land – the Fisherman’s Bastion is characterised by 7 turrets to represent the 7 Hungarian tribes who founded the present day country. It offers fabulous panoramic views of Pest and the Danube, and it’s THE place to get stunning pictures. Just keep in mind that this place is full of tourists from March – October, which kind of ruins the whole experience. If you want to get the best views of Budapest from the Fisherman’s Bastion, come early in the morning – at sunrise – to get a spectacular lighting (and to have the whole place to yourself).  Or come by after dinner, for a magical view of Budapest illuminated. 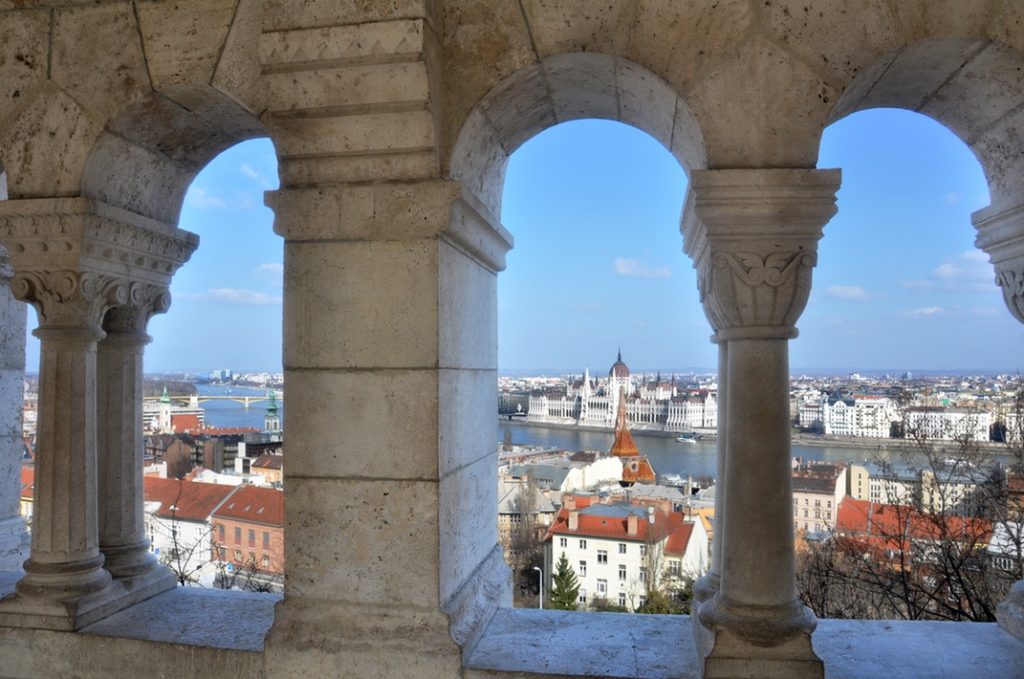 Apart from being the country’s Patron and the first King of Hungary, St. Stephen is also a splendid basilica in Budapest’s 5th district. It happens to be the tallest building in the city along with the Hungarian Parliament Building (96 meters), symbolizing the balance between Church and State. In addition to the stunning architecture and the beauty of the basilica itself, there’s a long line of people waiting to visit something else: the panoramic Basilica Dome. And who can blame them? The 360-degree view from the Basilica is mesmerizing.

The Chain Bridge is one of Budapest’s most iconic landmarks. Inaugurated in 1849, and named after the iron chains on which the road-beds hang. The Chain Bridge was Hungary’s first permanent bridge connecting Buda to Pest. It is absolutely one of Budapest’s most remarkable bridges. Not only is the Chain bridge the symbol of Budapest,  it also offers breathtaking views of the Hungarian Parliament building, the Danube, the Castle of Buda and the luxurious Gresham Palace.

I still don’t know if it’s more beautiful at night or during the day.

Boat ride on the Danube

While navigating along the banks of the  Danube may seem like something very touristy – and in fact it is – it’s also one of the best ways to take in the beauty of the city. Booking a boat ride on the Danube will allow you to see all of Budapest’s monuments from the river. The feeling that you get as you slowly approach the Parliament building is indescribable. Not to mention the angles that you get as you navigate under the bridges and hear everything about the history of Budapest’s monuments. Truly delightful. Just a quick tip: I wouldn’t go to the lunch or dinner boat rides, just in the afternoon or after dinner.

What are your favorite views of Budapest?

Lunch at the beach: restaurants on the seaside of Rome

Ciao, follow me on social media To find daily inspiration!